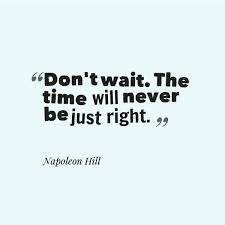 Here is the truth: We all LOVE to postpone. We all have done it a million times. And still, it’s not a wise choice to save our duties for later.

We know, we have to do it. We know, there is no way to get around it.
We know we have a lot of resistance.
We know it would be much cozier to sit on the couch, munch popcorn, waste some more time. And do it later – AGAIN.

Take the snooze button on the alarm clock.
It tells you: “Yes, you HAVE to get up. No way to stay in bed.”
You can pretend that it says something else.
But staying in bed in fact, is NO option.
You can postpone getting up. But you can’t avoid it.

You could hit the snooze button. All that does is creating an illusion.
The illusion of: if I just get up LATER everything will be fine.
An illusion is basically a dream, an imagined, no existing version of real life.
A fake image of what is.

Wouldn’t it be better to do that necessary thing NOW and dream later?
Or what about doing the unavoidable stuff first and later doing the things we are dreaming of?

It kind of goes back to the century old question:
What do I eat first: the spinach that nobody likes but thats healthy
or the french fries that clog up the stomach but let our taste buds explode?

I have a suggestion:
Make a test run how life feels like, when you eliminate the snooze button.
Do the unavoidable thing first, eat the greens, eat the bitter stuff FIRST.

Does not sound all too sexy, but notice how you feel about yourself.
You will be sooo proud that you are not snoozing through your life.
You are getting up, doing stuff – and later after things are done you will be sitting on the couch munching popcorn.
With a smiling face.

It’s just wise to do it that way round.
Makes all the difference in the world.

p.s. For some great music books go and visit www.AnselmaMusic.com.
Do it NOW – the popcorn is patiently waiting for you. Many thanks! :o)