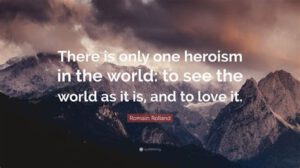 Some years back, a friend asked me if I wanted to help translating some Japanese Haikus by the famous buddhist master teacher Daisaku Ikeda into German. These were small poems, each conveying a gem of wisdom, beauty or philosophy.

I was not sure if I was the right person for the job. Having been in danger of getting kicked out of school – believe it or not – for almost 8 years of Gymnasium because of bad spelling. I was a lousy student at school that struggled in many subjects, German being the worst.
My brain was simply not wired for this type of school. Repeating after others has never been my thing…

Still, my friend insisted she wanted me to help the project along. In Japan, she had been a University student of Japanese literature so her understanding of this kind of poems was fabulous. Starting this project, she had some difficulty finding the right words in German. We both noticed we got the best results when she put the Haikus into English and I would translate them to German.

One of my favorite poems went like this:
Dig beneath your socks. There you will find happiness.
– Yes, it really said socks!
Which actually is quite funny. And quite Japanese as well!

I often think of this poem. It’s so wise.

In my life I noticed three main tendencies:
1.) To skip over what happens, to not look closely and basically ignore things,
2.) to “think positive” and frame things more rosy than they actually are or
3.) to catastrophize and make a drama (where there most probably is none).

I think digging beneath our socks means to truly acknowledge what is there.
It means to resist the pull of being shallow and superficial.
It’s very human to put a blanket over things to not get overwhelmed.
But at the end whatever is under this blanket will creap up. So better deal with it subito.

Acknowledging also means to put the rosy glasses down. And the drama glasses as well!
Both are a result of modeling our life after some Hollywood script where we laugh, get mad, fall seriously in love, cry and hate – all in just 30 minutes.
Which is ridiculous if you look at it.
It’s not productive and not wise to get lost in this heavy inner theater.

Acknowledging what’s there does not mean to deny or to give up. It means being brave, look at things as they are and then do something about it.
Dig beneath your socks. There you will find happiness.

Oh and by the way. When the translation was done my friend sent a copy of it to the amazing author in Japan. He sent a message back and said he was impressed, liked it a lot and sent his personal greatings. We felt so honored!
Digging for German words under my socks definitely brought quite some happiness :o)

Much love, have a great and beautiful summer
Anselma