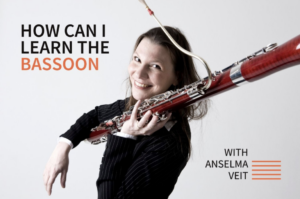 The renowned German Stretta Music, well known specialist and a worldwide leading online store in sheet music asked me for an interview. What an honor and privilege for me to give some of my lousy ideas and to manipulate interested folks towards being major bassoon fans! :o)

Here some parts of this interview. I hope it makes you smile here and there! I had the greatest fun answering :o) Please find the whole article HERE.

With so much love,
Anselma

What is the perfect starting age?
Today, there are different sizes of bassoon for different starting ages, which instrument makers have developed with love and skill from their existing Renaissance predecessors.
I myself have always liked starting with children from the age of four on the octave bassoon. This bassoon is tiny and has the reach of an alto flute. From the age of five, children can begin with a quint bassoon, from around the age of nine children can play the standard large bassoon.
But even starting at 80 is a great idea! When the bassoon gods tickle you, that’s the perfect starting age.

Which physical traits are advantageous for learning the bassoon?
When it comes to the bassoon, you should like to eat spinach and be strong like Popeye! (laughs) – Ok, that was a joke! You don’t need any special physical qualities.
A charming smile would be an advantage though. Even if all the baby teeth have just fallen out at the front! Since we roll in the lips, it also works well without front teeth.

Are there any additional costs besides the instrument?
Mouthpieces and reeds wear. I don’t want to say that a hard-working player needs new ones faster than a lazy one, because that sounds as if playing the bassoon diligently empties the piggy bank.
So pssst, don’t tell anyone that’s true! But making music makes you happy!

How involved is the up-keep?
After a few weeks or months – depending on how much you play (psssst!) – the bassoon reeds make their way towards the happy hunting grounds.
The bassoon itself is very easy to take care of, it is wiped clean and dry after each use and then the case is left open to the air.
My teacher from the Vienna Philharmonic plays a bassoon from the 1930s, and it still plays great today.

Can you teach yourself the bassoon?
Probably yes. However, the outcome of this experiment is uncertain. It would be a bit like the chemistry lab at school. You never know when it will explode, or whether everything will be black afterwards!?
Personally, I don’t know anyone who plays well and has attempted this adventure. But who knows, maybe there is someone out there?

How to practise without disturbing others?
By trying to be the nicest neighbour ever. This has a surprisingly good effect on the acoustic conditions in the house.
Every year on New Year’s Day, we give new ‘earmuffs’ in the form of large champagne bottles plus confectionery (without strychnine!!) to our neighbours. They seem to be working fine, because if, for once, we’re not practising, the neighbours will ask us on the stairs if we’re sick and if everything’s okay!?

Which different playing techniques are there?
I wrote a piece for back-to-front bassoon. For a teenage duo who rarely practise. (laughs)
Furthermore, we can create sounds like aliens, I like to call them ‘scratch sounds’ because they sound a bit like noise in the Milky Way. There are mentions of ‘multiphonics’ in serious bassoon literature, taking regular fingerings and screwing them up – I mean… redesigning them on purpose. (laughs)

What are popular pieces for the first performance?
“For Elise”. (laughs) – Ok, that was a joke!
There are few well-known hits for the bassoon, but there are many pretty little pieces if you look around.
Because I found hardly any suitable literature for my own students, I began to write pieces myself and to collect beautiful original works. To my astonishment, some of these have actually become classics.

Are there clichés about the instrument and its players?
Bassoon players are usually very nice and relaxed people. I remember how at the Vienna Music School, the orchestra leader of the children’s and youth wind orchestra regularly complained that the bassoons were a bit too chatty…
I have the impression that there are a disproportionate number of humorous, funny and creative minds among bassoonists. The players are probably as colourful and magical as the timbres of our instrument.

Please find the whole interview HERE.
Thanks to the wonderful team at Stretta. They are awesome, please check them out.