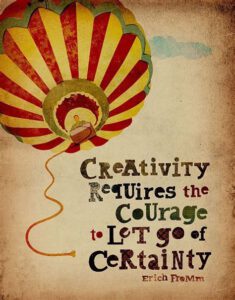 When I was a kid, I often spent time with my grandmother. She excessivly taught me to say please and thank you and did even go so far that she would throw things on the floor to see how long it took until I would rush to pick it up. She wanted me to be well mannered and prepared to be a good human.

Even though she was a well educated lady the thing she valued the most was creativity. Here is what she said over and over: “You are smart and can create something out of nothing. Just do it! In wartimes we baked cake out of nothing but flour and water. But we did it. You can do the same!”

Today I suspect, she actually did not see that much creativity in me, but she wanted to see it. When we form a sense of self that demands certain values from us, we tend to rise up to the occasion.
I guess she hoped that some day I probably eventually would get creative. And her little trick on me did it’s thing.

Here are some ideas that I observed that tend to work against us in the realm of creativity. I experienced all of them and still do. But when I keep reminding me that all of this is normal I tend to get less panicy.

Size does not (always) matter
When I set out to write a million duets, I probably won’t ever start. I better tell myself, I start with just one, let’s see how that goes. If someone likes it, I will try another one. And the funny thing is I always did find someone who liked the little stuff I tried to create and that kept me going.

Obsessive thinking
When everything follows the rules and is strictly logic, that can be beautiful. But most times it’s just plain boring. And who wants boring creativity? So yes, I think we are allowed to be contradictory, a little dramatic and also at times without logic or reason. That’s ok. – But don’t tell your spouse I said that!?

Fear of – what?
Sometimes we hold back because we are afraid. But what exactly are we afraid of? Being critizised? Making a mistake? Being ridiculed? Losing something? What? Making a fool of ourselves? As long as we do not name the beast, it has a tight grip on us. When we are brave, confront it and look that fear directly in the eye maybe this little ghost does not disapear. But it fades. Like an image that you light up in photoshop.

Just do it. Make cake from nothing but flour and water. I come over and taste test.
And I promise, I won’t throw something on the floor but will encourage you to bake another of these fantastic cakes!! ;o)

With so much love,
Anselma

p.s. We were invited to be part of the wonderful Anciuti Music Festival in Forni di Sopra, Italy and are more than happy to contribute a commissioned piece (a Tango!) for the participants of Reeds ‘n Kids. What a great place with great people, a wonderful initiative!

p.p.s. Looking for beautiful bassoon etudes? I love THESE.